General background of the history of Tang Soo Do

The name of the art that you practise is Tang Soo Do which means 'Way of the Chinese Hand'. The school that originally taught our style of Tang Soo Do is the Moo Duk Kwan school, which means 'House of Martial Virtue'. This school was founded by Grandmaster Hwang Kee in 1945. Tang Soo Do training takes place in the Dojang (training hall). 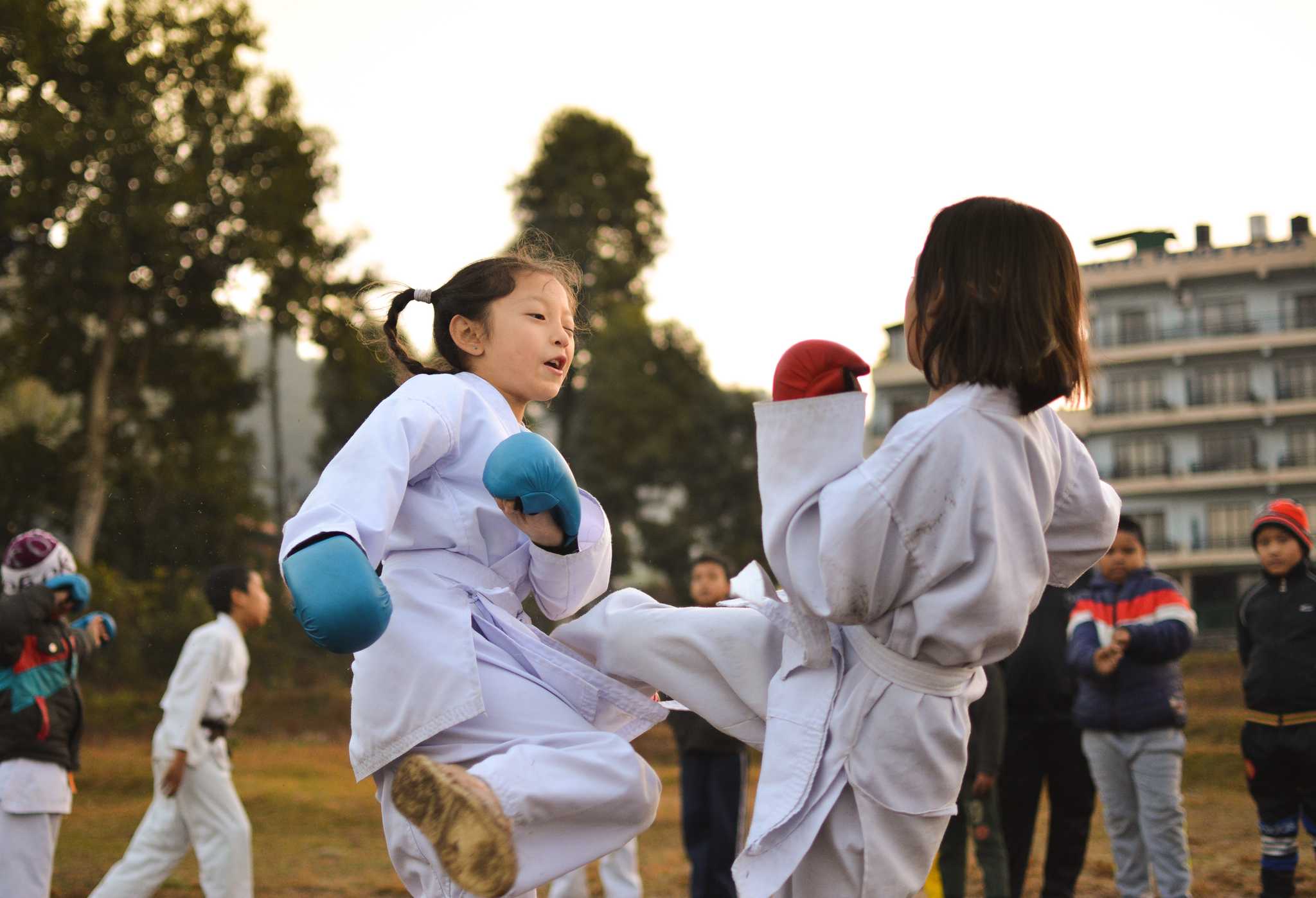 Everyone who practises Tang Soo Do wears a Dobok (karate suit) and their belt (De). The colours of the belts represent different seasons of the year and show the instructor how long the student has been training. The suit (Dobok) that our students wear is traditionally white (to show that all students are equal).

All of our students practise the traditional forms. These are patterns of movements made up of blocks (Mahk Kee), punches (Kong Kyuk) and kicks (Cha Gi). The first form our students learn is called basic form. Basic form has 20 movements and contains the 3 basic stances- Hu Gul Jaseh (back stance), Kee Mah Jaseh (horse riding stance) and Jun Gul Jaseh (front stance). The next set of forms is called the Pyung Ahn forms - Pyung Ahn means 'peaceful confidence'. Originally, this was one form called Chanan. There are now 5 Pyung Ahn forms which were created by Master Itosu ('Idos' in Korean) in the late 1800's and are symbolised by the turtle. Other forms Bassai- means 'to storm a fortress'. This form is symbolised by the cobra due to the sudden striking movements and contains 52 movements. Nihanchi-this was originally one form. There are now 3 Nihanchi forms which teach combat techniques for small areas such as alleyways or corners. These forms are symbolised by a horse and the name means 'Iron horse'. Sip Soo- means '10 hands' and is symbolised by the bear. Jaon- means 'Temple bells' and is symbolised by the goat.

You can Google it, Wikipedia it, search every Tang Soo Do association in the world (and there's a lot of them!) and each and every one will give you a version of the history of Tang Soo Do. If I may be so bold as to make the analogy, it's a little like reading the Bible - several accounts of the same story, each with the author's own bent on the details.

From the Korean side, you will find a fairly strong denial of any link to Shotokan. From the Japanese/Okinawan side, you will find an accusation of the Koreans having taken the art directly from them. The Chinese will add their twopenny worth and point out the White Crane influences and the Tae Guk Kwan form directly resembling their T'ai Chi forms. So, at the risk of upsetting someone, I'm going to be so bold as to take a very personal view of where I think the art comes from - look upon it as not necessarily the view of the management!

I think we have to look at the history of these countries to understand a little of the varying views on the art.

Way back in ancient history, the country we now know as Korea consisted of three kingdoms - Koguryo, Paekche and Silla. For over 500 years, these kingdoms each had their own internal battles and battles with each other. Then, in the seventh century, the Tang dynasty rose to power in China and the development of martial arts there began in earnest. At the same time, Silla, with its formidable Hwarang warriors, grew stronger and, recognising the threat from this force, Koguryo and Paekche forged an alliance which also extended into Japan. Concerned by this new force, Silla turned to Tang China and forged their alliances with them. Battles ensued - first overthrowing Paekche and then Koguryo - but the Tang army then refused to leave, causing the three kingdoms to unite and remove the Tang!

Peace eventually settled within both this newly united nation and Tang China and it became clear that the Tang had indeed left their mark with their fighting techniques and martial skills. The art of Tae Kyon, already practised in Koguryo was now being developed using methods learned from the Tang warriors. It was during this period that the Hwarang called their art Tang Soo Ki - Tang hand techniques. More unrest within the trio of kingdoms then ensued until the Koryo army eventually prevailed and the Koryo dynasty was founded, from whence we get the modern name, Korea.

During the Koryo period there was a close alliance with the then rulers of China - the Sung. The Koreans were calling their arts by the name of Soo Bahk Ki - hand striking techniques, and for around 250 years were sharing techniques and training with the Chinese. Then, in the early 13th century, the notorious Genghis Khan took control of China to form the Yuan dynasty and, when Koryo refused to join with them, Khan invaded Koryo, only to be heavily defeated by their armies - the only country ever to beat Khan!

The Chosun dynasty (1392-1910) was the last dynasty of Korea and it was during this time, in 1790, that Lee Duk Moo created the text of 'Moo Yae Dobo Tong Ji' which, even today is a seminal text, alongside the 'Bubishi', for all serious martial artists. When written, it became the training guide for soldiers of that time and clearly shows the Chinese influence upon the arts of Korea.

In 1910, Japan began its long and overpowering occupation of Korea which would last until the end of the Second World War in 1945. The Japanese dominance over the Korean people was total. Historical records were sought out and destroyed; the culture of the Korean people was wiped out and generations were raised as Japanese citizens, even taking Japanese names for acceptance within this new society. A major influence upon the Korean arts as we know them today took place during this period of occupation. The Japanese banned all Korean arts and only the study and practice of indigenous Japanese arts was permitted. With their identities stolen, it is no wonder that the Korean people felt such animosity toward Japan - even to the extent of denying the influence of Japanese arts upon modern day martial arts in Korea.

When Korea was liberated at the end of the Second World War, exiled Koreans came back to their country and began the task of regaining their own identity. In the area of martial arts, new schools began to open, with instructors teaching the arts that they had learnt whilst in exile. Influences from surrounding nations took their place within whatever Korean practices had been passed down and remembered through oral transmission. (Remember, the history and documentation had been destroyed by the Japanese and after a 35 year occupation, any that were still around to remember the indigenous arts were now ageing) . 1945 saw the formation of a number of significant Kwans (schools) in Korea, the majority of which went on to form the present day Tae Kwon Do in the 1950s - the art people most associate with Korea and which can arguably be recognised as the most unique art associated with that country. One school, however, took an entirely different route - that of the school of Moo Duk Kwan (school of martial virtue) - under the leadership of Hwang Kee.

Hwang Kee was born in 1913 in the area we know today as the DMZ (demilitarised zone) and had landed himself in hot water with the Japanese through his persistent practice of the banned arts of Tae Kyon, Soo Bahk Ki and Kwon Bop. For whatever reason - some say he was banned by the Japanese, some that he just left Korea to travel - Hwang Kee travelled China, studying their arts along the way. He originally called the art Tang Soo Do - although this term had been created in 1933 by Won Kuk Lee, founder of the Chung Do Kwan - but then called it Soo Bahk Do, forming the Korean Soo Bahk Do Association in 1960. Hwang Kee and his followers denied all links to Japanese karate, claiming that the forms they use were learned during his travels in China.

Coming from a Shotokan background, the first thing that struck me when starting Tang Soo Do was the use of the Pyung Ahn forms - Heian Kata of Shotokan. There followed Passai (Bassai), Sip Soo (Jitte), Nihanchi (Tekki), Rohai, Chinto, Jion, Kong San Kun (Kanku-dai) - in fact, all of these and more were all recognisable from my earlier training.But it is certain that they practice most of the above. Some schools, but not all, choose to also practice the Chil Sung and Yuk Ro forms created by Hwang Kee in the 1980s and, therefore, undeniably of Korean origin. We must remember that Hwang Kee would have gone through a Japanese-led education, both in schooling and in his martial arts training and, indeed, would probably have had dealings with Won Kuk Lee who freely admits that his Tang Soo Do was based on Shotokan. Also, during the time of Hwang Kee's travels in China, those areas too were under tight Japanese rule and would have felt the same influences as Korea. There were many karate masters in China at the same time as Hwang Kee and it is possible that he would have trained with some of them on his travels - indeed, he makes mention of Humakoshy (Funakoshi), I Dos (Itosu) and Hiasionna (Higaonna) and Maboo Mi (Mabuni). Even Hwang Kee accepts that the Pyung Ahn (Heian) forms were created by Master I Dos (Itosu), an Okinawan and direct student of Matsumura, from a Chinese form Channan that I Dos learned from the Chinese on Okinawa. Our Tae Guk Kwan form means T'ai Chi Ch'uan and, if you have studied T'ai Chi at all, you cannot fail to notice the likeness!

We could go on forever. No doubt some will take issue with some of the above, but it's a free country and healthy discussion is always welcomed - indeed it's a method of investigation! As long as we practice whatever art it is that we choose, with integrity and with the correct intent in heart, we won't go far wrong. I have, in the last couple of years, had the opportunity to mix with other Tang Soo Do associations - I have yet to find two who are exactly alike. But isn't the fascination in the differences? Most don't judge each other - we revel in our art and enjoy the camaraderie of seminars and tournaments, looking forward each time to meeting up with other martial artists.

Enjoy your training - in whatever arts you choose.